I am in favour of automatic curry but today, as a newbie, I have been bitten by it

Which was compiling to very weird JS with an unneeded function wrap:

And I was wondering… why??
Because Path.resolve expects TWO strings (just noticed the function signature). I am not sure why because the node function is variadic and the single string usage is the most common for me, but I guess I am not the majority

As a side note, I had to write my own binding so I can use the single argument version:

Not sure why the built in buildings do not allow this usage and have instead a resolve2 function for the two inputs scenario.

This should probably have been a type error. What are the type signatures of Node.Path.resolve and Node.Process.exit used in the original code? I.e., specifically which binding library are you using?

I don’t blame you but this reminds me of this image (props to my buddy justin). 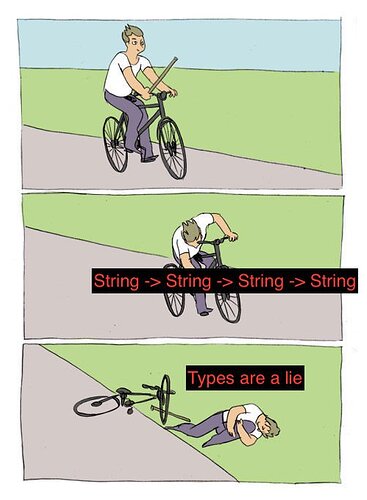 I know you didn’t write this interface, I’m not criticizing you at all, but this is simply a bad interface. A common problem I see from people using rescript is to dumb it down to the level of javascript and then complain that some types or currying or some other language feature isn’t worth it. (again, not your fault. this is an obvious footgun.)

But, even though this interface sets you up to fail, we can look at the docs (like you did) (or even the history of these docs…) and see it’s actually not a terrible interface in javascript. it just didn’t translate well to rescript.

The interface is better translated as:

Which would probably (idk?) crash if you passed it an empty array but it at least shows the intent.

And the old docs actually write it even better:

Which would nicely translate to:

I haven’t been up on rescript lately, so I don’t know if there’s some ffi magic to get zero-cost binding there (though you’re touching the file system, so a single extra function call is nothing here), or if you’d have to do a little work to get it in that state, but it’d be worth it imo, because you won’t immediately shoot yourself in the foot with it.

So one branch of the code had a type of string => string, and the other had a type of 'a, so they type-checked against each other and were accepted by the compiler. So yeah, definitely a footgun.

Looks like the Node.Path.resolve binding was written before varargs (splice) support was added, and it was never updated. Reason-nodejs library does it correctly: reason-nodejs/Path.re at b7b41349f85665d6cd7fc76a170229428e7ec94c · sikanhe/reason-nodejs · GitHub

Some interesting comments here.
As I said, I am in favor of typing and currying (that’s why am I using rescript after all), so I’m not blaming the language but myself.
However it is true that the function interface is not consistent with the rest of the modules, so maybe I’m not that stupid

.
Before writing that lines I used Path.join, which interface was indeed array<string>, so in this case I just assumed that if it not was that it was because it was a single argument. In fact I tried first resolve1 because I was expecting resolve to follow the other variadic translations.

The other issues highlighted here are even more complex, so they make me feel even better

Thinking about this a bit more, the variable fileToMove at this point would have had the type string => string, and you would have gotten a type error as soon as you tried to use it as a string. So I think the compiler has you covered in this case

Of course, ultimately the binding was not great.